The Old Library Museum is just one of many museums and historical buildings found in Historic New Castle. 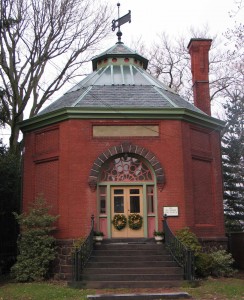 Photo courtesy of the New Castle Historical Society.
The Old Library was built by the New Castle Library Company in 1892 on land purchased by the Company from the Janvier family, who lived in Harmony House – adjacent to the library lot on its north side.  The Library is currently not open to the public.

The Company, chartered in 1812, had housed its collection of classics and law books in the Academy (built in 1799) across the street. Originally, the Company was private: borrowing privileges were limited to members and, it is believed, students at the Academy. By the late 1860s, the schoolroom was no longer large enough to house the growing number of books.  Still, it was more than 20 years before a new library was constructed.

The subscription-based library was open only intermittently following World War I.  In 1942, the Company rented the building to the recently formed New Castle Library Commission.  State aid was granted, and for the first time the community enjoyed a free library that was open to everyone of school age or older.

The “new” library, at Fifth & Delaware Streets and designed by Albert Kruse, opened in 1965.  The Old Library was used by the sculptor Maurine Ligon as her home and studio from 1965 until her death in 1979.

In 1982, the Trustees of the Common renovated the Old Library, and leased it to the New Castle Historical Society as a meeting place, library, and museum.

Research on the building itself continues.  It is very likely that the building was designed by Philadelphia architect, Frank Furness.  Its style – with its fine proportions, rich and varied brickwork, leaded glass, and woodwork  – is typical of his work. Furness was an architect of many excellent buildings in the Philadelphia / Wilmington area, among them Recitation Hall at the University of Delaware (1891) and the Wilmington Train Station (1905).  The building cost about $5,500 to erect, including plans supplied by Furness, Evans, & Co.

In the early 1980s, a paint analysis was completed on the exterior of the building.  The current exterior colors – brick red, toffee, and apple green – are close to the building’s original colors.  The Victorians were fond of using rich earth colors in surprising combinations that were a backlash against the whites and creams used in the first half of the 19th century.